People Like You: Contemporary figures of personalisation ran from 2018-2022
Evaluating our Personalised Cancer Medicine series of Science Cafés, 2018-2019

Kelly Gleason wrote ‘Reflections on developing and running a Science Café at the Cancer Research UK Imperial Centre‘ after our collaboration in hosting a series of science cafés on personalised cancer medicine. We planned an evaluation of the series and, indirectly, the approach that Kelly has developed for the Cancer Research UK (CRUK) Imperial Centre science cafés in general. We collected anonymised feedback as well as conducting informal interviews with research participants and Kelly used this material to reflect on a decade of work.

Kelly mentions the importance of a safe space. It is not straightforward to foster productive conversations between scientists, clinicians, patients, and colleagues, even though they may already know each other from encounters in the hospital, university, and the Maggie’s Centre.  They all have their own concerns and interests, and I learned a lot from the way Kelly helped people physically reach the venue or encouraged those who were anxious about meeting patients who had participated in their laboratory studies. Interlocutors were then able to listen and respond to each other in a relatively informal, small, and familiar context while another kind of science café might aim for greater variety or numbers in their audience (You can access the associated guidance document here). Through analysis of the material, we realised that the approach at Maggie’s relates to its position in a wider hub for involving patients and publics in cancer research. For example, scientists could present to clinicians and patients who had contributed to their research while students, patients and other people could familiarise themselves with the process of commenting and contributing as they considered taking up more formal research roles. Those who came to one café very often came to another, often over a period of years. In our series, some people focused on the how of personalised medicine, others on the why. Most considered the difficulties for patients and staff as new norms were implemented, and the interface between care and research emerged as an important area to address.

Kelly’s reflections may not reveal how hard it is to run these cafés alone, but our evaluation clarified their overall purpose in the CRUK Imperial Centre and raised questions about how to diversify and attract new audiences without losing an atmosphere in which everyone became confident to comment, ask questions or exchange views.

Kelly Gleason is Imperial CRUK Lead Nurse, and part of the Imperial Patient Experience Research Centre. She manages a translational research team working in cancer services at Imperial Healthcare NHS Trust, providing education and training, and coordinating the Patient and Public Involvement Group. Kelly has pioneered a Science Café approach that provides a forum for patients and researchers.

How it all started?

In 2010 I attended the International Association of Clinical Research Conference in the USA.  That year, the keynote speaker, Mr Charles Sabine, gave a very powerful and emotive talk about Huntington’s disease and the importance of research in this area.

Mr Sabine had lost his father to Huntington’s disease; his brother was in the advanced stages of the illness and he himself had chosen to have genetic testing to find that he too carried the gene for Huntington’s.  This news was the catalyst that caused him to give up his work as a war reporter and travel the world raising awareness of Huntington’s disease and the importance of research in this area.

There were hundreds of people in the room listening to his keynote speech but one thing he said made me feel he was speaking directly to me.  He said, “we will never deliver excellence in research until we get scientists and patients in the same room”. Those words hit hard. I knew he was right. I knew that patients had to be the focus of research no matter how far removed that research was from the patient bedside. To really understand each other, researchers and patients needed a safe place to learn about each other. 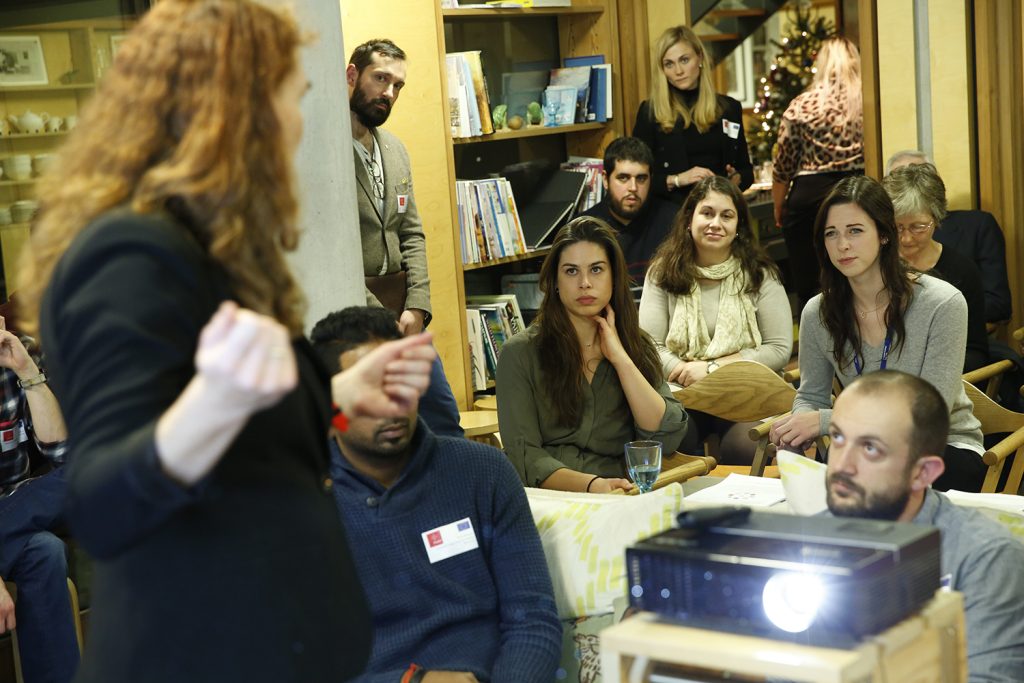 On my way back to the UK, I reflected on Mr Sabine’s message.  I thought about our organisation, the Cancer Research UK Centre at Imperial College, London (CRUK, ICL) and I asked myself how I could create a space for our researchers and patients to come together in dialogue.

This is how the Imperial Science Café began; the cafe was my first attempt at creating a safe space to bring together patients and scientists so that they could better understand each other and learn to work together to enhance cancer research at Imperial

For the last decade, we have hosted several cafes every year at our local Maggie’s Centre. These events took place between six and eight in the early evening. Speakers presented solo, in pairs or as a panel.  Presentations lasted between twenty and thirty minutes with the remaining time protected for questions and discussion. Presenters shared their research with or without slides; they chose a presentation style that best suited them in this environment. We hosted nine to thirty-five attendees at individual events; this group size created an intimate environment conducive to dialogue between our researchers, patients, and the public.

In 2019, as part of the People Like You project, we organised a series of cafes around personalisation. We used this opportunity to formally evaluate our science café platform.  Here is some of the feedback shared by attendees at these events:

Some people reported that they felt that they learned something new about a specific area of research.

Others stated they had learned about research in general, for example how long it takes to develop a new drug, what is a randomised clinical trial, or how data can be misinterpreted when reporting results and how this can be avoided.

Others enjoyed hearing from different perspectives whether that be an oncologist, a surgeon, a scientist, a nurse, a patient, an engineer, or a physicist. 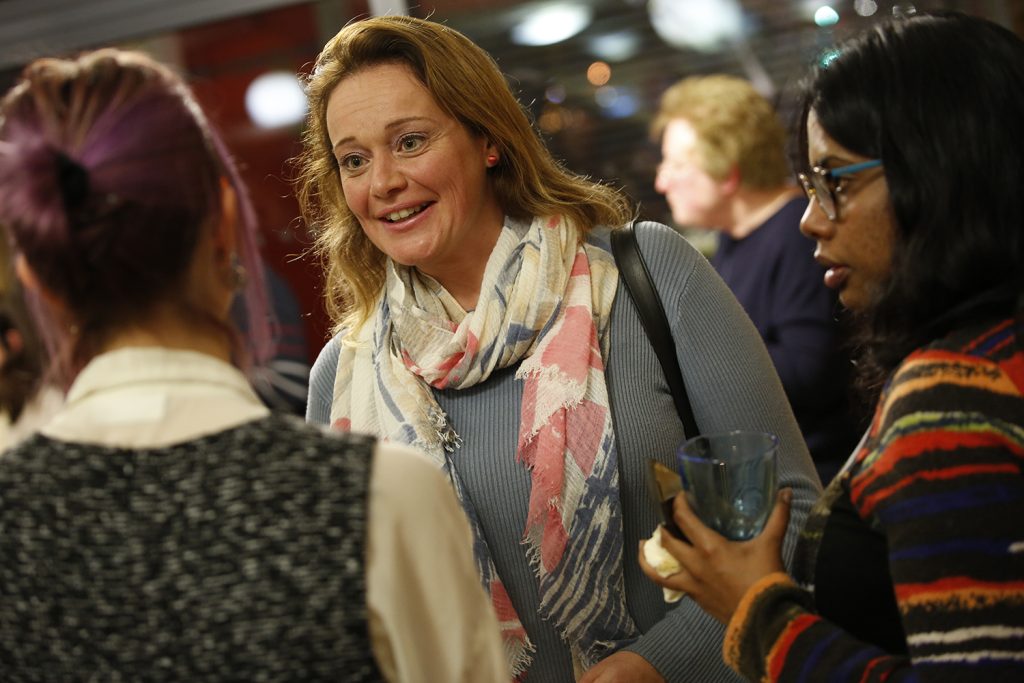 One woman said that attending a science café is like peeking behind the curtain to understand what takes place backstage.

People also said enjoyed hearing about success stories such as how a discovery in a lab at Imperial led to the development of a drug in a phase 1 clinical trial.

Some people left an event simply feeling inspired that such exciting research was taking place in their own hospital.

The surprising things we learned through a decade of running a science café:

Through the evaluation of the café platform, we learned that science cafes have helped bridge the gap between researchers and NHS delivery staff and help both groups better understand each other and how they contribute to better health for patients in different ways. As the audience expanded to include our NHS colleagues who worked alongside us in clinics and on the ward, we began to see we were one team.

We also learned that cafes are a good place to let attendees know about opportunities to be more involved in research at Imperial by joining for example .

We became aware that attending science cafes helped some people with a personal experience of cancer process their own diagnosis and treatment.

Over time we witnessed a natural evolution of the platform which provided researchers with opportunities to involve the public in future research projects. The dialogue at events with patients and the public began to inform their next steps in the research process.

The café platform is a great place for students to learn to communicate their work to a lay audience and to value of public involvement in research. The audience in turn enjoy shaping not only research but the researchers of tomorrow.

If you are interested in starting your own Science Café, you can find further details on setting-up and running a Science Café in the associated guidance document developed in addition to this blog. The guidance outlines the practicalities of setting up and running a Science Cafe, including advertising, format of the sessions, style of presentations as well as considerations needed such as setting your intentions for the Café and creating a safe environment.